Home » Snorkel in the Media 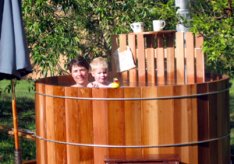 Crisis Averted ~ The author's wife and son soak in the completed tub.

Midlife crises take many forms. Some people will buy odd things, like expensive automobiles or hair transplants; others will dump their spouse or career, if they have those luxuries, and pursue less well-explored options.

When the fever struck me, as it must to most at least, it was with the appalling shock and force of an earthquake. After the ramparts of denial and rationalization had crumbled, I observed myself, a newly born stranger in my own life, engage in a blind fit of self-looting. Within weeks, I had purchased a convertible, an electric guitar, a fly rod, a riding lawn mower, a new house, and a hot tub.

My own happiness, I knew, lay buried in a 300-pound pile of cedar and woodstove.

My wife, Beth, plunged into a crisis brought on by this mad spree, seized on both house and convertible as her own, leaving me with the unsolicited advice that I use the last of our savings for guitar and fly fishing lessons, and, of course, therapy, before bringing either instrument — or myself — into her new home.

I was left with little gratification beyond riding in endless circles around Beth's new house on my lawn mower with our three-year-old boy. There was no lawn yet, just the promise of one hidden below a half-acre of expensive dirt. The only other artifact of this plundering that promised any sense of satisfaction was the 300-some-odd pounds of cedar and woodstove that, once assembled, would surely be a magnificent hot tub.

No Dissembling Required
Snorkel Stove of Seattle, the unprepossessing maker of my tub, is careful not to use that hateful word "kit" in any of its literature. Even so, I do not resent them for this. With the tub costing far less than a plastic spa of some kind, with motors and jets and whatnot, I was prepared to make some sacrifices.

What I had purchased was the makings of a three-foot-tall barrel six feet in diameter, with low benches and a large, aluminum stove, all to be bolted inside. This product was both dream and achievement of students at the Physics Department of the University of Alaska, Fairbanks, some 20 years ago. Their admirable vision was, and is, that the woodstove share the tub with its occupants; it heats the water (and, being aluminum, will never rust) yet remains separated from bathers by a cedar picket fence.

The instruction booklet was refreshingly well written, even sympathetic, urging the reader not to attempt assembly of the tub alone and promising that with two builders it would be ready for soaking within four or five hours. I had already spent four or five hours meditating on the project, sitting on the mower, manual in hand, casting depressive glances at the house where my wife and son enjoyed carefree lives. My own happiness, I knew, lay buried in this pile of cedar.

It took most of a day to build alone, but was astonishingly satisfying because I saw results immediately. There are arrows and numbers on all the pieces that matter, and a big rubber mallet included to bang them together. After assembling the floor, one grabs a stave (that's cooper's talk for "stick") with a precut groove and bangs that onto the floor, and keeps on doing that until one is out of staves or out of floor, whichever comes first. Three steel hoops hold the staves in place, then in goes the stove, fence, and benches.

I flushed with humiliation after turning the hose on to fill it, as water seemed to pour out the bottom of the tub faster than it was flowing into it. But the manual anticipated this, and counseled patience. Lots of it.

After several hours, and a second garden hose, the leaking subsided, and after a day the wood had "taken up" enough moisture to swell and seal all of the seams.

Prometheus Rebound
I managed to stuff ten logs through the trap door on top of the stove, now almost completely immersed in over 400 gallons of water. Somewhere at the bottom of this pyre, I had placed crumpled newspaper and a few twigs. I shoved my hand down through the wood, elongated lighter in hand, and touched off the newspaper. I shut the lid, and ugly billows of ash frothed menacingly from the six-foot-tall, galvanized steel chimney. Within minutes, it seemed, the smoke had disappeared. I peeked into the stove, and flames leapt out at me. It was then I observed a steady pulsing of heat chugging from the chimney. "My God," I murmured, "it's alive!"

Three hours later, the water temperature had risen from 50 degrees to 104.

We spent the next week tubbing every evening. When we returned home in the evenings, from work or day care, the three of us would race across the backyard, shedding clothing or diapers, respectively, and jump into the tub. I reheated the water only every other day, and then with only a few logs.

The silence was the most striking thing; I had wanted jets and filter, but my credit limit had already been breached. Now I was glad not to have to listen to them. Harmless tannins from the cedar stained the water the color of light tea, but I did not resort to the bucket of chemicals that had been included with my purchase, or their informative instruction manual, opting instead to simply drain it and refill it from our well. The 400 gallons or so emptied into our "orchard," where I had placed the tub: two peach trees, a plum tree, and one tall, spindly character that bore only small green rocks. Yet all served to flavor the smug cloud of at-oneness-with-nature in which we soaked.

Nature Strikes Back
Predictably, as the weather warmed, we drifted from our regular tubbing habits. It was some weeks of benign neglect later, brought on by the twin evils of overwork and laziness, that Beth had occasion to look in the tub while harvesting fruit.

"You have tadpoles in the hot tub."

It took a moment to grasp this. "That doesn't sound right," I mumbled, trying to remember just what a tadpole is. I marched out to the tub and took one look at the cloud of tiny swimming oblongs: "My God! Those are mosquito larvae!"

"Shall I get your fly rod?" asked Beth.

I instantly pulled the drain plug and dumped 400 gallons of mosquito tea into the orchard.

The time for oneness with nature was over.

The Reach For Bleach
To my surprise, testing and treating the water with a few teaspoons of chlorine took even less time than reading the directions on how to do it. The water remained clear for weeks on end, though Beth was skeptical, announcing after a close inspection, "I don't smell chlorine." A quick dip of a test strip indicating the water was clean and at a level of acceptable alkalinity proved my vigilance.

The fly rod and guitar now occupy places of honor beside the fireplace in Beth's house, displayed with pride yet still ready for action at a moment's notice. The net that came with the fly rod I've found useful for skimming leaves off the surface of the tub water. The wicker fisherman's creel hangs nicely on the stove fence, where it has proven as convenient for storing beverages as it must be for trout. We also have an old canoe paddle next to the tub, the only relic from an ill-fated trip on the Hudson, which we use to stir up the water and evenly distribute heat.

Finally, at the end of summer, we discovered that the mysterious green stones of the peculiar tree had become Asian pears, adding a completely surprising flavor to evenings spent in our little orchard and its cedar centerpiece.

"Now, if only my guitar were waterproof," I mused.

"Let's find out!" cried Beth, leaping from the tub and running to the house.